By Barbara Shukin on September 8, 2014 in Modern History, Teaching Research and Writing

This school year, we are studying the background to the Civil War through the 1990’s. We do 1 hr. of writing and 1 hr. 15 mins. of history every other week with a group of about 12 students who are between 5th and 8th grade.  Between co-op times, we work on our own.

The students are using the Modern History Portfolios, the Modern History Portfolio Teacher’s Guide, and the Houghton Mifflin text book, A More Perfect Union. In addition, in co-op and at home, I read aloud from various high quality living books, plus read from Story of the World whenever possible. I also provide printed handouts of short encyclopedia articles for additional research materials. The plan is for students to complete one double page spread of the History Portfolio per co-op day, with about 1 hour of homework expected before the next class.

This is what we did that first day of co-op. Our lecture and discussion for this initial series of five classes aimed to shed light on how it was that our country came to the point of Civil War. What were the roots of the problems that brought us to war? We talked about the beginnings of a two party system, and early rifts between the North and the South. I underscored the fact that our first three presidents were in office from 1789-1809; that in this period there was already the clear beginning of a two party system; and that approx. 60 years later, we were embroiled in a Civil War.

The in-class text book reading was from A More Perfect Union, and covered pp. 134-136. While reading aloud, I stopped to explain new terms, and expounded upon ideas hinted at or mentioned in the text. I elaborated on the following:

-The definition of Federalist;

-A very brief intro to the subject of the different characteristics of the North and South. (North-manufacturing and cities; South-farming/agrarian based);

-Sec. of the Treasury Alexander Hamilton’s plan to pay off the debt after the Am. Rev.

-James Madison was a southerner and he came up with a compromise. When the Federal Govt. bought back the bonds to make good on the debt, he wanted the original bond holder, soldiers and patriots, to be paid more than the speculators. He knew that many southerners had sold their
bonds, and that more speculators lived up in the manufacturing north.

-Why did the south not favor a tax on imported goods? I showed a map of Virginia which detailed the rivers that penetrated deep into the state. British ships, laden with manufactured goods, conveniently delivered everything southerners needed. Southerners, who depended upon imports, did not want a tax on imports. The north favored a tax on imports because it made American produced goods less expensive and therefore more desirable to Americans. If Americans bought more American made goods, that would be good for the north.

-Secretary of State Thomas Jefferson was a southerner, disagreed with Hamilton, and sided with James Madison.

-Jefferson and Madison began calling their party the Republicans, also known at the Jeffersonian Republicans, or the Democratic Republicans.

After the reading, and the discussion, the students provided me with keywords. They called out one word, or a phrase at a time, and I wrote them down as they called them out. As discussed in a previous post, providing keywords rather than complete sentences is much less intimidating. Everyone can get involved in this part. 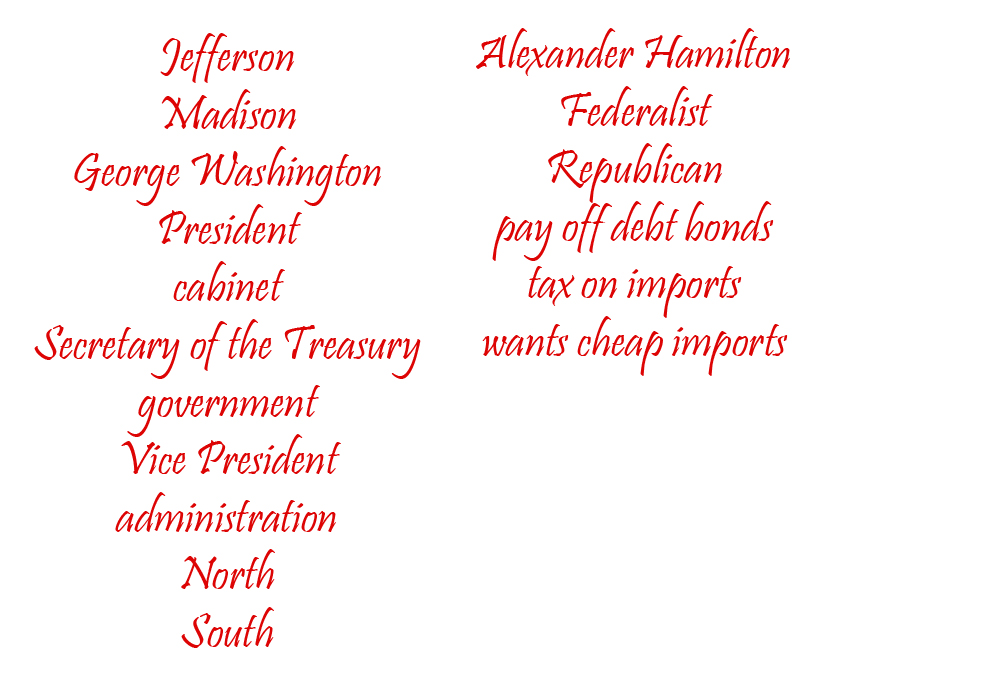 A running list of keywords provided by the students.

As a group, we then sorted these words into topics. *Since this was the first class of the year, I introduced the idea of sorting into topics by giving my “laundry basket and dresser drawers” example. On the dry erase, I drew three rectangles and we sorted the keywords into them as if sorting clothes out of a laundry basket. So, in the following picture, I show the topics sorted into something like three dresser drawers.

They decided on the outline in the photo, and were able to confirm that each collection focused on a single topic. Since this was the first class of the year, we didn’t rank the details into A,B, C, D. Also, we just didn’t have time even if I had planned to. There will be plenty of time to work on that later.

This outline was pasted into a large text box within the chapter “A New Nation.”  Each week, if not expressly assigned, I challenge each student to work on the off week to turn any outlines into full reports, and to paste both the outline and the report into the Portfolio. Each week, as we work on pages in the Portfolio, we also add all images and complete any additional written activities  indicated in the History Portfolio Teacher’s Guide.